Functional programming is a shining and trending topic on the other side of the spectrum of programming, which has been proven to be a better choice in some specific area of problem solving. I could still remember the mind blowing of various ideas and thoughts in FP when I first learnt Elm two years ago. It just shows me yet another possibility of thinking after being immersed in the world I took for granted, all kinds of the imperative languages, C, Java, Ruby, Javascript. It’s a whole new world.

Recently, I picked up the FP learning by taking part in a book reading club in the company I work, for “Haskell Programming from first principles”. My girlfriend was teasing me that I’ve never showed up in a Haskell class at the university, why the heck you talk about it all the time now. I should admit that I might still feel bored if I could jump back in time. It’s just I don’t have the mind power or experience to think about the problem in a big picture at that time. Anyway, I’m glad it’s never too late. It’s been two months for the fun journey. I want to share some thoughts on it.

I just finished reading about algebraic data types in Haskell. Basically, it’s done talking about type systems in the book. By getting to know types in Haskell, I questioned about why type exists all the time. I cannot help myself thinking about how would I solve the same problem in OO world, like what is the difference about how data is structured between OO and FP. Gradually, keeping punching my head, I feel like I start to see something through. I start to realize that, programming is all about data and operations. Different paradigms, OO and FP, are two different approaches. Under the big picture, languages choose to implement different characteristics, like inheritance, encapsulation, polymorphism, prototype, immutability, static and dynamic types, etc, to reach a same goal, to represent and manipulate data in an effective way.

Since it’s all about data, what is data? I consider it as a general name for all possible values, like primitive ones, 1, 'a', True, which are usually bulit into the language, like a list [] and a map {}, working as a group of values following some basic simple rules. To better fit the language into modeling various realistic problems, OO introduces class, which packs up the states (data) and methods (operation) together (In some sense, class is a set of data and rules applied onto the data). In the meantime, FP provides a different path, with type as a representation of a set of data and function (operation) as a way to transform data. For example, in OO obj has a state value, and obj.foo might migrate the state. In FP, we just do foo(value) directly. (The limitation or visibility of the operation comes from encapsulation in OO, but type matching in FP)

So what is type? Type, in short, is a set of values (data). For example, Int8 is a built-in type in Haskell as a set of 256 numbers, starting from -128 to 127, Char is a set of all possible charaters, String is a list of Char. How to represent a binary tree:

What exactly do we need to know about the tree? Three nodes with three values, and the connections among them.

In OO, we are going to create a structure regarding the node, with a state recording the value and two links for the connection.

To make it a tree, instead of a plie of nodes, we can create a structure like

So a final representation for the binary tree in Ruby, it’ll be

What about in Haskell? At first, we create a type to represent the tree like below, which basically means a binary tree is either a leaf, or a node with a value and two nodes, which are both binary trees.

To represent the tree,

It’s done! To be honest, I was totally blown away by the second I understand how things work here. It’s neat, elegant and way over my thinking.

Cool, so how it works? Between two cases in two languages. Here is my understanding: in the perspective of a compiler (or interpreter), 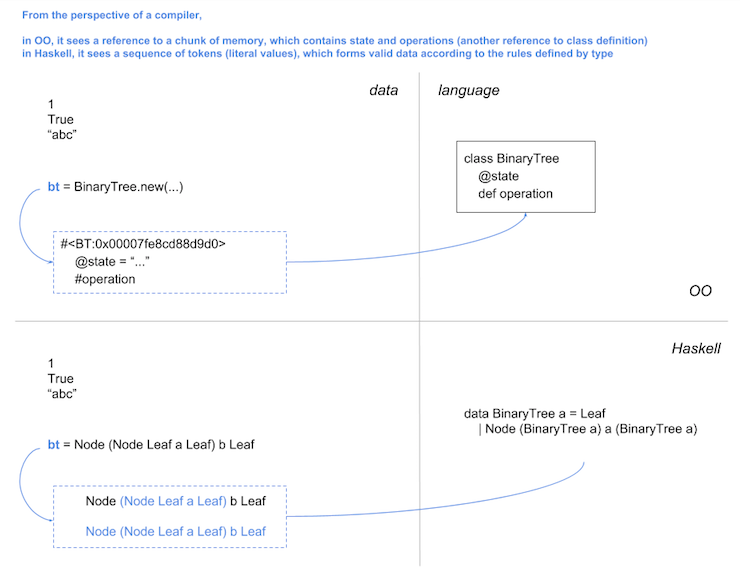 Bascially, this is a note of thinking while I was learning it. I’m still digesting and trying to find out a path to fit the FP ideas into my system of knowledge.

At last, I want to share some materials which is truly helpful to me