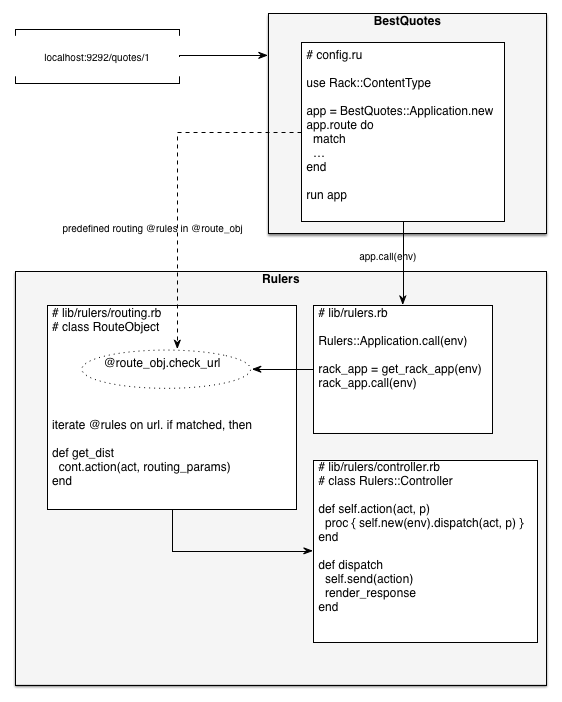 Youʼll need to go into the rulers directory and git add . before you rebuild the gem (git add .; gem build rulers.gemspec; gem install rulers-0.0.1.gem). Thatʼs because rulers.gemspec is actually calling git to find out what files to include in your gem.

Rails encapsulated the Rack information into a “request” object rather than just including the hash right into the controller. Thatʼs a good idea when you want to abstract it a bit – normalize values for certain variables, for instance, or read and set cookies to store session data.

When debugging or printing error messages I like to use STDERR because itʼs a bit harder to redirect than a normal “puts” and so youʼre more likely to see it even when using a log file, background process or similar.

For simple structures, “inspect” shows them exactly as youʼd type them into Ruby – strings with quotes, numbers bare, symbols with a leading colon and so on.

gem "rulers", :path => "../rulers" This trick actually relies on deep Bundler trickery and requires you to always “bundle exec” before running things like rackup. If you forget that, it can look like the gem isnʼt there or (worse) look like an old version.

When you load a file called whatever_class.rb, youʼre not actually guaranteed that it contains WhateverClass, or that the constant WhateverClass is actually a class. How would you check?

You might try calling const_get(:WhateverClass)… Except that you just made const_get try to load automatically. If you call it on an unloaded class inside the method call where you try to load, youʼll recurse forever and get a “stack level too deep” and a crash. So const_get isnʼt the full answer.

But thereʼs a reason I say “hideously hacky.” Think about ways this could break. For instance – think about what would happen if you hit this in multiple threads at once. Oops!

Running by bundle exec rerun -- rackup -p 3001. The “–” is an old Unix trick. It means “thatʼs all the arguments you get, the rest belong to somebody else.” Specifically, it tells rerun to ignore the “-p” later.

Run it with ruby erb_test.rb

The few lines starting with _buf are interesting. Erubis takes apart our string, appends it to _buf piece by piece, and adds the variables in as well after calling .to_s on them. Then it just returns _buf.

Rake actually ships with a “Rake::TestTask”.

A word of caution: Rake will always run your tests by loading them into the same Ruby process, then running each one in turn. This is a lot faster than running them in individual processes, but it means that your tests can mess with each other in annoying ways. If you find yourself saying, “but I didnʼt set that global variable in this test!” think about whether some other test might have done it. For extra fun, the tests donʼt always run in any predictable order.

You can find the top-level view code in actionpack/lib/action_view.rb, and the whole big chunk of Rails view code in actionpack/lib/action_view/. From there, look in template/handlers/erb.rb for a pretty compact description of exactly how Rails uses Erubis to render Erb templates. You can see that most of the bulk of Railsʼ version is setup, interface and dealing with string encodings. You save a lot of trouble by knowing that youʼre basically only dealing with ASCII and/or UTF-8 strings.

Use multi_json (a generic swappable back-end for JSON handling) to built a simple system of models based on JSON files.

ActiveRecord is an Object-Relational Mapper so that each of your objects represents a database row. ActiveModel is the interface that Rails uses to all of storage including non-relational stores like Cassandra or MongoDB, to fit particular object types into Rails.

For a good overview of ActiveModel, have a look at a blog post from Yehuda Katz on that topic: ActiveModel: Make Any Ruby Object Feel Like ActiveRecord

In Rails, the return value from the controller is ignored. Instead if you donʼt call render (Railsʼ equivalent of render_response), it will automatically call it for you with the same controller name, and the viewʼs name set to the same name as your action.

Rails doesnʼt return the string when you call “render” (well, usually - some calls to render do!). Instead, it keeps track of the fact that you called render and what you called it on. Then it gives you an error if you call it again, or uses the defaults if you get to the end of a controller action without calling it

Rails (more specifically, ActionPack) uses Rack in a very similar way, even exposing the Rack Request object with the “request” method. Especially metal.rb and metal/*.rb. “Rails Metal” is a name for the lower-level Rails which goes mostly straight through to the “bare metal” – that is, to Rack.

You can find a lot of the Rails implementation of Rack in these directories – for instance, metal/redirecting.rb is the implementation of the redirect_to() helper which returns status 302 (redirect) and a location to Rack. You could steal the code and add a redirect_to to Rulers, if you wanted.

You can also find things like forgery (CSRF) protection, multiple renderers (i.e. Erb vs Haml), forcing SSL if requested and cookies in this directory. Some are complex, while others call to Rack very simply and you could move right over to Rulers.

You can add a method to the SQLite model that takes a column name and a type, and then when saving and loading that column, does something type-dependent to it, like the boolean or JSON fields above.

ActiveRecord allows both ways – you can research the before_save and after_initialize callbacks for how to do it on save/ load.

ActiveRecord contains mappings of operations like our gem, but also migrations, cross-database compatibility and a huge amount of optimization and general complexity. And thatʼs even though they use the ARel gem for most of the heavy lifting!

With any Ruby web framework, you can modify how it works by adding Rack components around it. I like thinking of them as pancakes, because Rack lets you build your framework and your application like a stack of pancakes.

Rack::URLMap is a way to tell Rack what paths go to what Rack apps - and if thereʼs could be two that match, the longer path always takes precedence.

Rack::ContentType is to set the default HTML content type for everything. Since itʼs at the top, outside the blocks, it applies to all the blocks.

The lobster, by the way, is a simple test app built into Rack. Youʼll see it as an example in many places.

The primary Rack application object in Rails is called ActionController::Dispatcher.

ActionController::Base allows you to get mini-Rack-apps for each controller action because it inherits from Metal, the basic Rails Rack class. So you can call MyController.action(:myaction) and get a Rack app for that action in your controller.

Rails 3 takes this a half-step farther and makes every action on every controller a full-on Rack app that you can extract and use.

Define route to save rules in an instance of RouteObject, and use get_rack_app to route to controller actions.

Update Rulers::Controller to use self.action to initialize rack app, and dispatch to specific action.

Each Rails controller keeps track of a mini-Rack stack of middleware which can be specified per-action like before_filters.